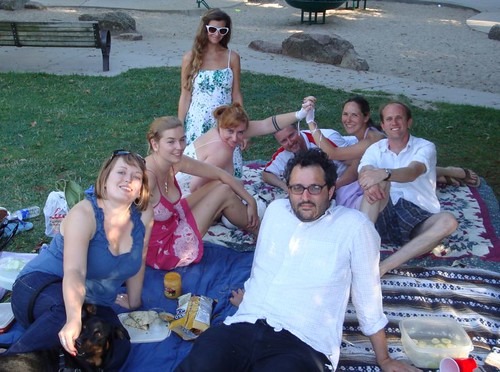 This weekend was the first official British Garden Party held at Pleasant Hill Park. In direct conflict with our own sovereign nation, another group had reserved the picnic area to our southeast in the name of France.

Gene: With what. Our disturbingly bright petit-fours?

Me: Capture their flag!

Kris: And we don’t even have a flag! We will so win this Battle of Gregory!

After a determined, and sneaky, flag battle–so subtle it was like it never even happened–more people arrived and the real drinking began.

I’ve never gotten drunk in a public park in the daytime before. Let me tell you, it’s a little embarrassing. Also the post-park heat exhaustion headache and continued drunkeness for like 3 hours after I got home was a trifle ridiculous. What can you do though? Some days you just have to be British. Even in 95 degree weather.

There were two home-made drinks. One, made by Adam, was full of rum and fruit juices.

Me: What? That’s in France.

Kris: It was in England ONCE.

Me: Maybe Southhampton. Or Shropshire.

The other drink, made by me, was full of gin, triple sec, mango wine, flat lemon-flavored seltzer water, and 3 cucumbers. It never got a name during the course of the party. I have now come up with Gin Coquette. Because: 1: We played Croquet but sometimes Gene calls it Croquette. And 2. It is a coquettish beast of a drink. All light and tart on the tongue and then punches you in the face 15 minutes later with fizzy pockets of drunk coursing through your veins.

We played bocce ball and croquet, sat around drinking, eating, and chatting desultorily with British mannerisms (once I stuck my pinky out while drinking from my plastic cup. No, really.) And I had a lovely time. You can see pictures here: British Garden Party. 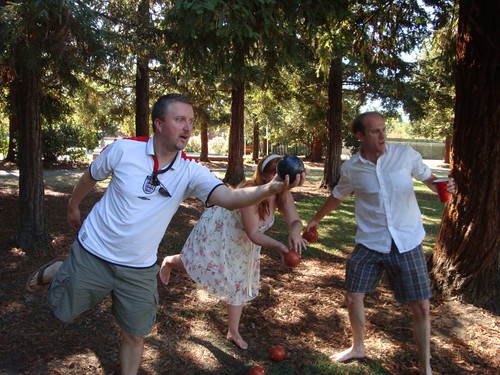