On Saturday I went to San Francisco to see the new touring show of Cirque du Soleil–Totem.

On the whole, I was not super impressed with this show. Admittedly, I was also on a lot of Sudafed for my cold. But it just seemed, for the most part, like tricks I’d seen in previous shows and in several of the acts as if they weren’t even challenging themselves. For example, the very last act was a bunch of men and some flexible bouncy beams. Two men would hold a beam, a third smaller, slighter man/boy (I swear one was maybe 15) would bounce on the beam and do mid-air somersaults and then land on it again. All of this was done without a net or a harness line. Some of it was incredibly dangerous, yes. But it was also short and only one of the acrobats actually did amazing things. The 15 year old one was totally novice. I was like, really?

The story of this show seemed to be kind of aboriginal/evolution. There was a guy who was sort of an anthropologist/Darwin who wove in and out watching the acts which were primarily made up of lizard people, apes, and indigenous persons (observation based entirely on my understanding of their costumes). But then there were some random elements. A disco ball person? Some super sparkly girls doing juggling with square shaped clothes they spun on their fingers and toes? They had no relevance to the storyline and thus seemed terribly out of place. Though, man those sparkly costumes were awesome.

My favorite act in the first half was the five Chinese(?) girls on unicycles. 1) Their costumes were most excellent–weird little skirts made out of leaves and/or feathers, tattooed bodysuits, a lot of glitter, and amazing face make-up designs which I had a great view of being in the third row. 2) Those bikes were HIGH and they were flipping bowls onto their own heads and each others while riding the bike with one foot. It was impressive. Though it did not, admittedly, really fit into the aboriginal theme either. Whatever. Maybe they were supposed to be some kind of animals… 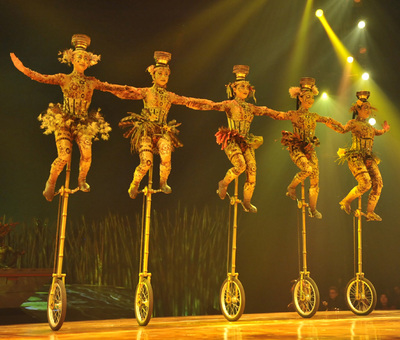 My favorite act of all was definitely the yellow-clad couple in the second half who played on the trapeze. I’m relatively sure they were supposed to be portraying love-birds–in this case: actual birds. Their act was a lyrical ballet and it was seriously incredible the things they did on the trapeze bar thing. But everything was smooth and flowed from one trick to another. They moved their bodies very gracefully and had absolute trust in one another to be where they needed to be in each moment. I could have just watched them play on the trapeze for two hours. That would have been fine. It didn’t hurt that the male half of the duo was quite possibly the most beautiful man I’ve ever seen. At the end of the show there was this dance number they all did and he was directly in front of me on the left side of the stage (and remember I was in the third row so this was a close-up). Holy Sweet Baby Jesus. His face is just stunning. And part of the dance was distinctly Bollywood in flavor so he repeatedly did this shoulder roll thing that was positively designed to make the female and gay members of the audience salivate. 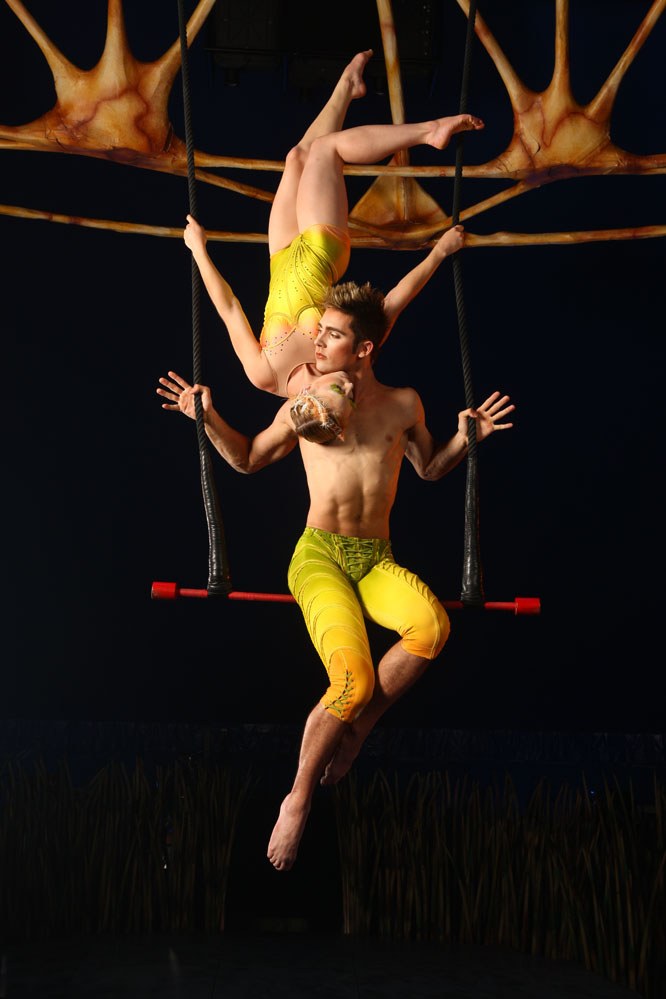 So, I guess what I’m saying is this show was pretty good but maybe not worth $100. Plus $30 in parking (RIDICULOUS). But if you can find some video or better pictures of love-bird-man, I heartily recommend it.