It’s rare to see one of your idols in person. Even rarer when said idol is basically a Japanese National Treasure and only infrequently leaves his home country. Luckily for Long-Hai and I, Miyazaki was forced by his contract with Disney to make a scheduled number of appearances in the states and one of them was in Berkeley this weekend. 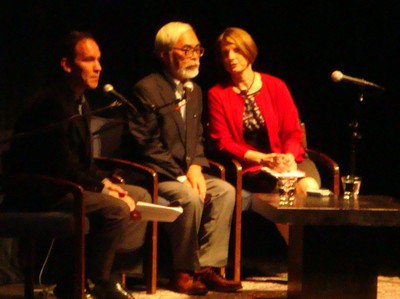 The talk at UC Berkeley was between Miyazaki and a professor from Tokyo University who didn’t ask particularly great questions. Or at least didn’t phrase them very well. A lot of the time the two of them just sat up there giggling at one another–which, don’t get me wrong, was totally awesome. Giggling Miyazaki is adorable, after all. It’s also possible that the translation from English to Japanese and Japanese to English lost a bit of meaning in the process.

One of the audience questions was about true love in his work and whether he believes in it. He relayed a story about his staff discussing Sosuke (the main character in his new film Ponyo) and how Sosuke will have to deal with Ponyo (a goldfish who becomes a human girl) as they grow up. His staff were debating how much trouble Ponyo will cause him and Miyazaki claimed that true love “comes at the end of all our difficulties. We find true love there.” So Sosuke, in his view, will be “all right”. Ponyo might cause problems but that is what love is to him. It is what is created when you overcome trials together. (You see why I find him adorable? He says sweet things about love! It’s not just his tiny stature and shock of white hair.)

Miyazaki made a face of such horror and a quick, negative head shake at even the idea of making live action films. His response to the question was “You’d have to turn the landscape back 50 years and that’s a little difficult to do…even people’s faces are different now.”

I thought the idea of how his movies only reflect the past–and what he views as a better time–was interesting. His refusal to make live action is not based on using real people and sets so much as it’s a rejection of progress and the destruction of nature in pursuit of development. This is a theme which can be heavily seen in several of his films; most notable in Princess Mononoke.

When asked about his interest in apocalyptic imagery and themes, Miyazaki said, “It would be wonderful if I could see the end of the world in my lifetime, but it doesn’t look like that’s going to happen. So I use my imagination instead to see it.”

How awesome is that? I’m kind of terrified of living through the apocalypse and seeing what comes next so to hear someone lament their inability to watch it happen is jarring to me. At the same time, I must admit that fictional visions of apocalyptic realities are one of my favorite reading/viewing topics. So he has a point, getting to experience it first hand and see what society devolves into would be amazing. Plus I think a giant part of his interest is visual–seeing how the landscape changes in the face of total annihilation would be fascinating. Still, I think I prefer just using my imagination to actually undergoing the upheaval.