October was kind of ridiculous. I thought September was all bad ass with 48 books read. October kicked September’s patootie into the ground and then stomped on it a few times for good measure.

Other Worthies: Ill Wind by Rachel Caine, The Tapestry: The Second Siege by Henry H. Neff, Graceling and Fire by Kristin Cashore, English as a Second Language by Megan Crane, Tempt me at Twilight by Lisa Kleypas, and all the Julia Quinn books I read from the Bridgerton series.

Least Favorite Book was a toss up between: Cowboy Feng’s Space Bar and Grill by Steven Brust and Dead Girl’s Dance by Rachel Caine (these are the 2 I didn’t finish)

Number of Boxes of Books for Sale: Still 5, but an overflowing 5. Seriously I need to get rid of these.

It should probably be noted that 37 of the books I read this month were manga. I’d say that maybe 5 of those counts as one actual book just in terms of how long it takes me to read them. 12 of the books I read in September were also actually manga. These are probably inflating my numbers. But at least I’m admitting it here.

23 of the manga read this month were of the Fruits Basket series. So good. Man, I’ve seen the TV anime of it multiple times but I’d never read the whole series before. The library had most of the ones I didn’t already own and I just tore through them. I had to keep going back and checking the last image of the last book a couple days in a row before I could finally stand to give them up and return them to the library. It was so perfect and made me so happy. Now I want to own them all.

The Thirteenth Child, my other favorite book of the month, is by an author I have long liked. I read Wrede’s Dragon series multiple times as a stripling and was both amazed and delighted that she suddenly had a new series coming out that I had been unaware of prior to seeing it in my mom’s Scholastic order catalog. So not only was it a miracle, it was also free since mom gets stuff gratis from Scholastic when her 4th graders place orders. And then it turned out to be really good! It reminded me a lot of Robin McKinley’s Dragonhaven just because of the world building as seen through the eyes of the main character. It’s an impressive feat to present an entire story based around the POV of one character. Wrede doesn’t do it in quite the way McKinley did, but I read it as similar all the same.

I have also now read all 4 of Megan Crane’s books and stand by my statement that she’s a female Jonathan Tropper. Everyone Else’s Girl and English as a Second Language are definitely her best two. I liked Frenemies and Names my Sisters Call me but not nearly as much. Anyway, if you like Tropper (and if you don’t, you should: especially How To Talk to a Widower) then you should give Crane a chance. Or if you just like amusing, well-written light fiction (yes, ok, it’s basically chick lit), then you should try Crane.

All right! Onwards into November then. Don’t look for much though since I will be trying to devote several hours a day to my own writing, I will probably not be reading so much of others’. November should be a slow month for reading. Though the new Ouran High School Host Club is coming out. And a new Margaret Mahy. And the new John Flanagan (which I totally ordered from Australia already). And and and….sigh. There goes my bank balance.

On this last day of September I was looking back at my book journal (where I keep track of my obsessive hobby) and thought I would share. Sept is a big book month what with the 4 day San Francisco Public Library Big Book Sale on the last weekend. There was also a smaller Pleasant Hill Library book sale at the beginning of the month. Plus many new books by beloved authors came out this month…well, as you will see it was busy.

Other Worthies: Dreamfever by Karen Moning, Grimspace by Ann Aguirre, The Five Sisters by Margaret Mahy, Start me Up by Victoria Dahl, The Fire Cat by Esther Averill, Everyone Else’s Girl by Megan Crane, and Hounds of Rowan: The Tapestry by Henry H. Neff.

Least Favorite Book was a toss up between: Improper English by Katie MacAllister, Blue Diablo by Ann Aguirre, Meridian by Amber Kizer, Someone to Love by Kasey Michaels, or The Runaway Duke by Julie Anne Long.

Number of Boxes of Books for Sale: 5 (Sigh. Powell’s anyone?) 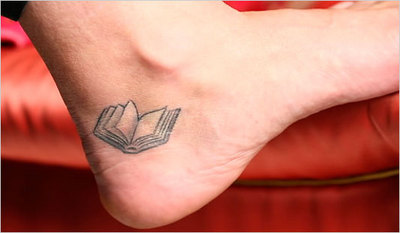 Not my tattoo, but it could be.