On Cinco de Mayo, I celebrated by watching the classic silent film The Lost World at the Castro theatre in San Francisco as part of the International Film Festival. In addition to being an awesome silent film with stop motion dinosaurs, there was a live band accompaniment to the film. This band was none other than Dengue Fever, the most awesome combination of punk, jazz, rock, and Cambodian lead singer you could ever imagine. I went, admittedly, mostly to see the band, but I ended up really, really enjoying the film.

Favorite line of the movie said by my favorite character Dr. Challenger, in response to Malone’s request to join him on the expedition to the Lost World:

“Most likely the brain of a child, but the body of an athlete. Accepted!”

Seriously some excellent use of italics and exclamation points in silent films. Plus Dr. Challenger’s hirsute head was practically a character in and of itself.

The first half hour of the film and music was amazing. But then it seemed as if Dengue Fever mostly played the same chords repetitively for the other hour and 10 minutes. And Chhom Nimol only sang like 4 songs. I expected her to 1) sing more and 2) sing some in English. I’ve never heard her sing in English! I was all excited. So the music portion was a trifle disappointing.

Also upsetting was the number of dinosaurs mawled upon by the allosaurus. I have to say I really hate allosauruses now. I was pretty happy when the herbivore brontosaurus got him in the jugular and bit down hard. Take that, allosaurus!, I cried silently, beaten by a leaf-eater!. But then the bronto fell off a cliff, sad. He’s shipped back to London to prove to all the scientific naysayers that live dinosaurs do to exist, suck on that. Of course, being a stupendous story of adventure and romance by Sir Arthur Conan Doyle, the dinosaur gets loose on the streets of London and rampages, sending the citizens fleeing! It’s very exciting, made more exciting by a driving Cambodian rock beat. Eventually she destructors the London Bridge and falls into the Thames, swimming off back home to the Amazon plateau from whence she came. Probably intent on gnawing on some more allosauruses. Sweet! I’d watch that sequel. 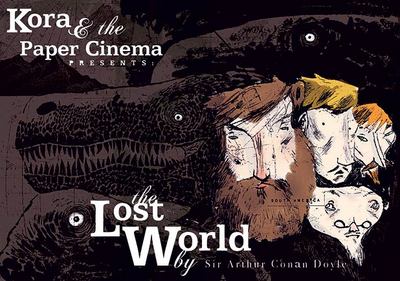