At the first of the fabulous fondue fetes/Magic: The Gathering/Ladies Craft Night (we like combos), I propped the camera on top of my water glass and pushed the timer button. Tami walked in.

Tami: What are you doing?

Me: Taking my picture.

Tami: Do you want me to do that?

I set the camera up again. Tami walks back by the room and shakes her head in despair.

Lisa: I could take it?

Tami: I could call you ‘whore’ again? 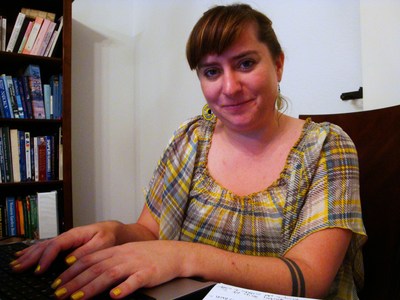 Admittedly this is on Facebook, but because I hate FB and it will quickly disappear on there to “Older Posts”, I need to archive it over here.

It it it, I keep saying. Sorry. So yesterday I let my mother take a copy of my second novel, Book ‘Em, to let our hairdresser borrow.

In the abstract I didn’t mind the idea of my mom giving a copy of my second novel to our hairdresser but now that she has left with the book….Guh. Do you know how many sex scenes are in there? Neither do I! Because I lost count!

Erica, Jason, and Jolie commented all up and down, left and right on this. Suggesting fishbowls and dramatic readings. Jolie eventually full-on demanded a reading by Mabel, one of my most memorable characters. I played Mabel in Real World Old and Real World Old: Permanent Vocation. She is old. And quite sassy.

At midnight, this is what Mabel had to say:

” ‘You are a very dirty girl. I’m going to scrub you clean with my…’ What’s that word? No! That is unsanitary! In MY day we washed like the good lord intended us to. With our eyes closed. Alone. Hmph. You think my hands are shaky? Well, it’s just my thing. But you should see the hands of people who SAY that word. Let alone TOUCH it. No. I know how to stay clean. Don’t get dirty! And that’s my two cents squared or cubed or whatever amount of reality is plenty enough for decent women.”

Oh Mabel, how I love you. I came this close to liking my own comment.

today’s project (don’t worry this spate of projects and posting about projects will end quickly. i miss my days of leisure) involved a ridiculous amount of recyclables and summoning up the courage to go the the recycle place.

2 hours spent sorting thru everything that could be recycled in the lean-to of the side yard. this involved touching many things which cats had sprayed urine on. also throwing away many things which hindered access to garbage cans full of PBR cans my brother left here over 3 years ago. smashing process also took a while. i smashed and i smashed and i smashed. from my one previous trial run going to a recycle plant ($7) i learned you have to unscrew the lids from all the plastic bottles. so i had to do that too. i now have blisters FROM UNSCREWING LIDS.

30 minutes spent convincing myself i could deal with recycle plant attendants.

michele, you can do this. it’s not so scary. they will not bite you. sure you have SIX CANS of recyclables. but they exist to take them off your hands. all right, yes, you are wearing your glasses which make you have trepidations about going out in public, but you know what? pink eye is not for the faint of heart. buck up, missy! just ignore the smell of your car and the smell of the recycle plant area, take some hand sanitizer along, avoid eye contact and get it done!

so i had kris pump me up via instant message for a little bit. then i left the house! annnnd promptly detoured to jo-ann’s fabric because the wait was too long for recycling. eventually though, i had success.

30 minutes to actually drive to, get rid of and be paid for the recyclables. only marginally terrifying. at one point the attendant did ask me in a sort of world-weary annoyed voice, “is this all of it?” and i had to reply in a subservient apologetic cringing murmer, “no.”

not too shabby. except for how it was 3 hours of work and means i am making like minimum wage. what’s minimum wage? it’s probably not $13/hour. whatever. time for left over pizza and some well deserved couch time.

tonight we went to see bacchae by euripdies at the ancient theatre of epidauros on the pelopenesian peninsula. from athens, we caught a chartered bus in kflathmonos square (by panepitisimo metro stop) which took us to gate 2 at piraeus port. here we got on the georgios which took us across the bay to epidaurous. another bus covered in rainbow stripes took us from that dock to the theatre which is up in the hills.

the play was amazing. it was all in modern greek and the fact that all i could understand was the occasional personal name totally didn’t matter. the ampitheatre held somewhere around 6000 people, though it wasn’t completely full. it was built in the 4th century bc, but was buried until the late 19th century and preserved relatively intact so very little restoration work has been done. in addition, the acoustics are flawless.

bacchae is about dionysus and pantheus, pantheus’ mother and the maenad. dionysus proclaims himself a god but his relatives mock him. in punishment he turns the women of thebes mad so they become his followers, the bacchae, also called maenad. pantheus has dionysus chained and brought before him in order to publicly denounce his godhood and prove him for a fake. in answer dionysus causes an earthquake.

the way they did this was one of my favorite moments in the whole play. earlier when the whirling dervishes of mad women were cackling and jumping with reckless undulating abandon across the stage, they were each given a pair of rocks by D’s acolytes. they would periodically bang them together in counterpointal rythym to the drums. when pantheus has finished castrating D’s godhood, D slips his binds and calls P a fool. he then strides out between the double file of women and pauses a moment at the top to pronounce a few more, no doubt, pithy statements. the women, all still doing thier weird imitation of a susserating giggle, suddenly go silent with him. in this breath of quiet space, they all simultaenously throw their paired rocks on the ground at pantheus’ feet and stare him out of countenance before whirling off like the truly mad mysteries they have become.

the beautiful thing was their intensity in every action they took. the cackling, the silence above all, the striking rocks on the floor, and the stare. those women, they had presence.

later on the bacchae rip pentheus to pieces and his mother is left holding his head. in a slight return to sanity, she recognizes her son and tries to give birth to him once more by performing an upside down crawl on hands and feet bent over backwards with his head resting on her pubis to be dumped in the box containing the rest of his unattached body parts. this doesn’t work.

i perfectly agree with lucy who says of the bacchae in prince caspian, “I wouldn’t have felt safe with Bacchus and all his wild girls if we had met them without Aslan.”

wise words, lucy, since probably they would have stained their teeth red with your blood.

they’re not coming. but we did go. (marina might actually be going. to russia that is. in august. how cool is that?)

anyway, i know it’s absurd that we just went and i am already putting up the pictures for it. but whatever. your local, friendly, documenter strikes again.

for those of you who i haven’t seen in a while. i got hair extensions! big ones! lots of them! and some pictures of me actually got taken for once. shocking, i know. so go marvel at my hair. and my tasteful, fashion styling wrist bands (which protected the touch up job i got done on my wrist tattoos this weekend.)

plus, in other news, kim raised $670 with her rummage sale for the sf aids foundation/fundraiser walk. yey kim! and also yey to jason, erica, and i who lent lots of moral support and sat around in the chairs buying things for ourselves all day saturday. self-congratulatory pat.

i started realizing it when i had to hug her good bye; when i figured out how much i was actually going to miss her. but then i pushed the unpleasant thoughts to the back of my brain for about 5 hours while kristen and i talked about things like summer fling cosmo kid quizes, taking motorcycle lessons, and clit-teasers (i still like to say ‘cock-tease’ even when referencing a girl doing it to me. it fascinates me how i’m more ok with the word ‘cock’ than i am with the word ‘clit’. i think it’s jason’s fascination with the word which has predisposed me towards it.)

anyway, for those 5 hours there was too much dirty talk going on to think about how the one person i have seen consistantly 5 days a week for the last year and a half is no longer here. it’s pretty bad when i couldn’t even make it thru more than one day of work without her before i gave notice at my job. but seriously, i’ve become completely dependent on her being there in the car with me on the way to and from our hated jobs, at the movies with me seeing terrible films (although she has a higher level of discrimatory power than me, who sees everything), picking up dinner when we’re starving, picking glass out of our hair when i get in an accident, bitching about work and people and life and buffy and terrible books and good books; but mostly just being with me and around me. what am i going to do without her right there? a large part of my life will change, is already changing. and it makes me sad. it makes me sad too that last night was her last night here in the bay area for who knows how long and i didn’t even spend it with her. well, that makes me more angry at myself than sad. but still.

ducky, i miss you already. piggy, we need to just *test* drive around at midnite more often.