My cousin John called this morning to say he was done making my bow and would mail it this week. I was then telling my mom about it.

Me: So I’m going to need some kind of target for the backyard.

Me: Well, but a hay bale is short. What am I practicing for there? Bunnies? I’m not going to be shooting bunnies.

Mom: …What are you going to be shooting?

Me: You know, in the apocalypse when there’s zombies. Or people trying to steal my stuff*.

Mom: I don’t think your arrows are going to be much good against zombies.

Me: Of course they are. I just have to get really good and nail it in the eye so it reaches the brain.

Me: This is common sense, Mom.

Mom: You’ve put too much thought into this.

Me: Sheesh. Obviously someone has to.

* People stealing my stuff is a real fear.

So over the course of 365 days, how many books did I read, buy, borrow from the library? How much did I spend? How much of my life has been wasted on literary pursuits?

YA
The Tomorrow Series (not all of them) by John Marsden
Demon’s Surrender by Sarah Rees Brennan
Cinder by Marissa Meyer
Prized by Caragh M. O’Brien
Losers in Space by John Barnes

Lit
The Thin Woman by Dorothy Cannell
Alif the Unseen by G. Willow Wilson
The Haunting of Hill House by Shirley Jackson

Kids
Winnie the Pooh and The House at Pooh Corner by A.A. Milne
The School for Cats and Jenny Goes to Sea by Esther Averill

Essays
The Girl Who Was On Fire ed. by Leah Wilson

We’re almost there! I’m feeling pretty good about this, guys. Think how much less pressure I’ll feel every month and the demise of the screaming “To Do” notes littering notebooks and my laptop desktop. How many years have I been doing this anyway? Now I’m curious. Unfortunately I’m on a BART train and I don’t have internet. Also the sun just went down and it’s dark. Stupid Daylight Savings.

Favorite Book: The Sparrow by Maria Doria Russell. This book was amazingly good. (Qualifier: To me.) It’s about….well, it’s about belief in God contrasted with exposure to an alien race on a far distant planet. Basically it’s about questioning belief, religious journeys, awesomely developed science fiction, the power of religion….etc. The title comes from…, no that would give it away. Guys, it’s great. I loved it. And it did a thing I hate–non-linear story-telling–and I still loved it. That’s saying something.

Least Favorite Books: Loving Lady Marcia by Kieran Kramer (I shit you not, she’s Marcia Brady), Shadow’s Claim by Kresley Cole (woman, get back on your game), and The Lady Most Willing by Julia Quinn, Eloisa James, and Connie Brockway (Three authors is maybe not the most conducive to good story-telling).

“…we share a bond I’d defend to the death if needs be. If all goes according to the natural order of things, siblings will know us longer than our parents, longer than our spouses and friends.”
—Loving Lady Marcia by Kieran Kramer

“The Jewish sages also tell us that God dances when His children defeat him in argument, when they stand on their own feet and use their minds. So questions like Anne’s are worth asking. To ask them is a very fine kind of human behavior. If we keep demanding that God yield up His answers, perhaps some day we will understand them. And then we will be something more clever than apes and we shall dance with God.”
—The Sparrow by Maria Doria Russell

(Note: the internet says I started book blogging in 2009.)

This is the easiest post to write. I read a grand total of two books this month. TWO! Wait, that’s a lie. I didn’t finish one of them. One book! Amazing.

I was spending all of my free time (which amounts pretty much to mornings on BART and lunch times) to writing a National Novel Writing Month novel. I haven’t even finished it yet (as of January) and I was 4,000 short of the 50,000 at the end of the month so I can’t even count myself a NaNo winner this year (well, last year). It was all very sad, people.

I mean, I guess I made a solid start. And I have reached 50K now. Am at about 60K, I’d guess. Who knows really though as there’s still 60 hand-written pages to transcribe and I can’t even read my own hand writing. Nor do I have the time or energy to type it up. I may need that dictation software. You know who’s birthday is coming up? Oh, it’s mine.

Books Read: 1
Books Re-read: 0
Books Unfinished: 1
Books Borrowed: 3 (including Telegraph Avenue by Michael Chabon and Bared to You by Sylvia Day, both of which I waited months for and then didn’t have time to read and had to return to the library. Blergh.)
Books Bought: 0
Books Given: 0

Favorite Book: Carbonel: King of the Cats by Barbara Sleigh. I wanted to read more cat books after all the Esther Averill’s last month and this was by the same publisher and came up in search results. It was good. More about human (kid) interactions with a special cat (talks, knows magic) than cat on cat business like Jenny and the Cat Club. Still a good book for kids (and me).

Leas Favorite: The Casual Vacancy by J.K. Rowling. Fuck, woman. Who knew you could do boring minutia so well? I couldn’t stand it.

Here I am past all the books sales, second month with a job and the month of NaNo is almost upon me (during which I have what is known as A Very Poor Showing).

I don’t remember what else was happening in October really…

Oh. A trip to Napa with the gang, pictures here. Thanks Flickr! 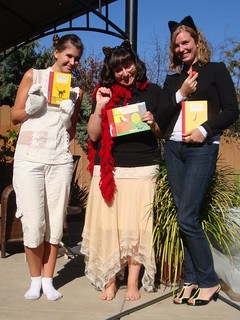 Books Read: 17
Books Re-read: 0
Books Unfinished: 4
Books Borrowed: 14
Books Bought: 39 (Apparently there was an Alameda Library Book sale I forgot about when starting this post)
Books Given: 0
Money Spent: $79 (I bought more than just the library ones)

Favorite Books: Esther Averill’s Jenny books, faves of which were The School for Cats and Jenny Goes To Sea. Also I liked The Haunting of Hill House by Shirley Jackson.

The cat books were all delightful, except maybe Captains of the City Streets because you know how I feel about domesticated animals living on the streets. We were reading these for FT this month and I got a lot from the library. If you’ll recall I wrote about the re-reading of the compilation book here after buying it at a book sale in 2011.

I also read The Haunting of Hill House for a book club–this one at work, where, yes, we have a book club because we’re nerds. A call was put out at the beginning of October for creepy books to read and I suggested Hill House because I wanted to read it. I’m glad it was chosen and that I finally got to read it because it’s awesome, but it was also nerve-wracking being the person who recommended a book. It’s about, as you might have guessed (or know already if you’re Kris), a haunted house and some people who come to document and experience its paranormal effects. It’s well written and evocatively creepy. Though I did kind of still wish for even more story.

As you, most devout readers (ie Kris and Marina, maybe others) may have noticed–I fell completely behind on my book blogs once I got a job. Hilariously, devout readers (notably again, Marina and Kris) you don’t even like the book blogs! Hilarious!

I’m going to catch up now at least through the end of 2012 because that seems appropriate. But I’m not sure I can continue this same method moving forward into 2013. I might just start telling you about my favorite books in a month or two months or as they happen or whatever. But not do this whole rigamorale each time. Because, let’s face it, this is obviously not sustainable for me.

Alif the Unseen is about a programmer in the Middle East who writes a code based on 1001 Nights. It’s…what I would consider sci-fi literature, I guess. But a lot closer to true lit than most of the stuff I read. The characters were compelling, the plot was gripping, all the elements came together nicely. Hightly recommended if you’re into technology and classics and Middle Eastern tropes.

Least Favorite Books: Unspoken by Sarah Rees Brennan (not nearly as good as the Demon Lexicon’s trilogy. NOT NEARLY), Enchanted by Alethea Kontis (Frog Prince story. Seemed promising, wasn’t really), A Lady by Midnight by Tessa Dare (not as good as A Week to Be Wicked), and Legacy of Tril #1: Soulbound by Heather Brewer (UGH).

Today I got to be one of the top authors in the field of Television Commons for my Japanese Animation Senior Honors Thesis from the University of Puget Sound. You remember, THAT OLD THING. While IM’ing with a co-worker about other sundry things (primarily creepy stalking tendencies and the impulse to drill holes in things but really he’d just been asking if I wanted to come watch a training session), this lofty status of mine as a TOP AUTHOR was brought to life in new ways. Mostly depraved ways where I started a mighty war with the folks over in Film Commons. They’re going DOWN; I’ll cut a bitch.

Michele: staring at the wall takes up a lot of my time, you know.
but thanks for inviting me.
i like observing things.
(even walls).

Dave: well, I’m a theatre kid, so I like being observed
(even when I’m not actually doing anything)

Michele: i have a lot of creepy thoughts about drilling holes in walls to work through with a therapist. APPARENTLY.
first step: FIND A THERAPIST.
second step: HIDE MY DRILL

Michele: fourth step: NEVER LOOK BACK.
yes. this is a good plan.

Michele: my enemies being all those people who tried to take my drill and/or filled in the holes i drilled? yes. they deserve ABJECT CRUSHING.

Michele: i better start working out to be in shape for crushing my enemies. also i better make some enemies. or a nemesis. NEMESIS.

Michele: nemesissies. DEFINITELY.
for they will cry for their mommies and wet their pants
when i show up to CRUSH THEM.

Dave: working out is overrated, get yourself a giant fighting robo-ma-jig

Michele: sure. i’ll get right on constructing that. over here i have some push pins, paper clips, and a leafy plant to work with. what do you have to contribute?

Dave: ummm, I’ve got some sustainable tissues, an empty water cup, and a pair of chopsticks

Michele: i can work with this.

Michele: SCIENCE.
also, nemesis the goddess has “adamantine bridles” that restrain “the frivolous insolences of mortals.” according to wikipedia. nice.

Dave: yeah, there’s nothing wrong with that

Michele: i might have to science myself up some bridles to use on those insolent mortals in Film Commons. they think they’re better than us in Television Commons? THINK AGAIN, NEMESISSIES.

Dave: this might be one of my favorite conversations ever

Michele: you should save it for posterity when i’m famous. and/or when i get put in jail for trying to put bridles on unsuspecting academics.

Dave: either way you’d be famous