Sometimes I make things that I can’t tell if I should be embarrassed about or really, really proud. I made one of those yesterday. Fish and I spent practically all of Sunday on my new bed watching streaming Netflix and being cozy. And then I discovered PhotoGrid’s sticker option. And then I found out Netflix Instants had Seaquest DSV which I had JUST been discussing with Dan at work and then things went into embarrassing territory. 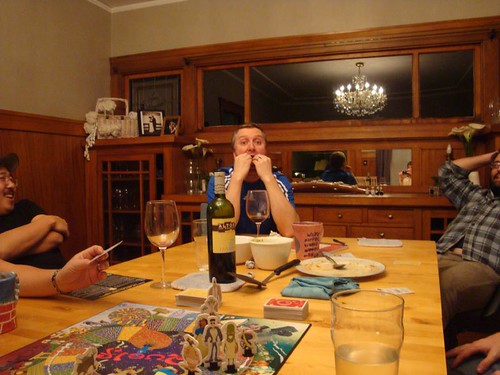 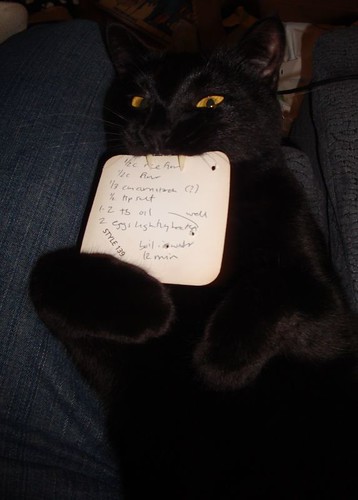 I’m reading and sort of editing/writing more of my YA novel right now. I was hoping it would be going better. It’s only about 100 pages right now (1.5 spacing, 11 pt font), which is short. It’s not even quite 50,000 words (this part I’m editing) and I was hoping to double it while going over it. Not happening. At all. And it’s not that what I have written is bad. It’s pretty good! But short. And I have trouble lengthening the story.

Let me give you an example. Say, I’m telling you a story of part of my day. I would choose the shortest route to get from point A to point B.

I was thirsty. I went and got some water. And then I sat back on the couch with cat.

Boring, but informative. Point A = thirst, Point B = water. Try to extrapolate this in terms of my zombie YA novel. Main character needs food, she goes ashore, she gets food, she returns to ship. I need to make that like 20 pages long instead of 2 but it’s VERY HARD. And I get waaaay too bored trying to make something longer when it’s so much easier to make it simple and to the point. My point here is that I’m pretty sure that makes me a bad writer. Or at least a really lazy one.

My throat felt like I had swallowed sand. Dry, dusty Saharan sand not even the sand I was used to from California beaches. Scorched, hot sand. Dried and dessicated like a lizard who’d been lying under a flaming ball of gas for a few days.

He continued lying on my stomach with no change in demeanor.

Yeah, I talk to my cat. He’s around all the time and I get lonely. Sometimes he talks back. {read} I talk back for him. {/read}

“Are you the fuzziest Fish-face in the whole world?”

“That is the wrong question.”

“Yes. I would like a smackeral. I like treats. They are yummy. Smackeral, snackeral, do doh do. Maybe two?”

“Because you are so fuzzy and cute.”

This time, I ignored his fuzzy cuteness and plucked him off my lap so I could roll off the couch. He immediately curled up into the warm spot my body heat left behind. Sometimes when I walk down the hallway in my house, I like to slide in my socks. And in the kitchen I often do dances to songs I make up and sing to myself. Today was no exception.

Because you are the best

I have 4 water cups. They’re tall and plastic so I can’t break them (I break glass easy). They’re each a different color and I play favorites. Yellow, green, red, and blue, I love the last two best. Much like I love red and blue pixie styx best (but black Fish Styx best of all). I dislike grape pixie styx, but I would love a purple cup so that does not correlate.

Dancing to my new song involves some booty shaking and a lot of twirling. I like to pirouette a lot so it’s good I took so many years of ballet and know precisely how to angle my wrists for the proper graceful arm movements. A pirouette without proper arm positions is worthless.

When I get back to the couch with my water, Fish slits open one eye to look up at me from his couch-hogging sprawl.

“Is it time for second breakfasts?”

“You threw up first breakfast.”

See, that was way too hard. Today is a day I don’t feel like being a writer. Like most days. Except that it’s kind of all I am right now. Which is ridiculous since I never even wanted to BE a writer. Ugh, back to zombies. I need to finish this before April so I can do the Script Frenzy (like NaNo, but you write a script of 100 pages instead of a novel of 50,000 words). Though I will write a graphic novel, not a script–the idea is the same.

unemployment has its perks. the main one being lots of time to do projects around the house. today’s project was intensive (well, intensive for some one whose days generally consist of lying on the couch emailing, watching dvds, and reading)

Step 1: laundry. it piled up as laundry does and i started on the first of four loads this morning (morning being a subjective term much like “intensive” and for me being approximately 1:30pm).

Step 2: piles of books on floor in bedroom. cannot take it anymore. must reorganize and purge bookcases so everything will fit.

Step 4: email for a bit with kristen about purging books and libraries of our future selves.

Step 5: change over some more laundry

Step 6: sort piles of books into non-fiction, fiction, sci-fi, romance, and YA.

Step 7: find out jacob and lisa got engaged, have a bout of phone and emailing with friends.

Step 9: begin purging bookcases starting with non-fic, moving thru to fic, have purged enough or become a supremely inventive stacker to have cleared one whole shelf. continue purging and stacking until starvation sets in

Step 11: have reached romance! do i really need to see all the titles? no! stack 2 deep, more delightful kresley cole’s, julia quinn’s, judith mcnaught’s, and jennifer cruisie’s in front.

Step 14: hang up all outstanding laundry in preparation for new laundry.

Step 16: put away all clean laundry.

Step 17: put 8 boxes/bags of books to sell in guest room.

Step 18: celebrate today’s success with mini bottle of 17 year old scotch found on bookcase (purchased when last in scotland–1998). fish styx celebrates success with favorite toy found behind row of books on third shelf up (WTF? how does he do that?)