Nuala recently sent me a postcard for my birthday. She was rather delighted with the “puppy belly” section. I can see why. I mean, it’s both cute AND horrifying. I made a t-shirt out of it. Saying good-bye to Nuala and Garren was about what I expected. It didn’t really hit me until I was driving the streets of Benicia on my way home and the aftermath of them actually being gone is getting more depressing by the day. Although their super happy (and sleepy) faces in FaceBook photos makes it seem again like they’re just on holiday (which, admittedly, they are right now). 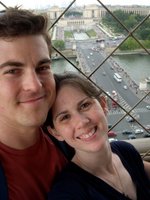 Enough of this maudlin crap; I bore myself.

To get an idea of my mind-set that day you should know I’d just gotten home from 4 days of drinking heavily on Lake Shasta and a 5 hour drive. So I was both exhausted and kind of punch-drunk. I get to her mom’s house and we bust out a bottle of champagne; looking suspiciously at the Netflix envelope, we read the plot in order to make up drinking game rules.

Michele: So…..”the dogs of war are unleashed.” See a dog, take a drink?

Garren used the “Nerd” rule pretty often. Unsurprisingly, all things considered: this is Nuala and I watching a Star Trek movie after all. We also made up a rule about them “discovering” anything based on the title. When we found out that the Undiscovered Country is actually a future of peace we were a little disappointed; but we busted into a second bottle of champagne anyway. I was making up little things they were discovering all along. I’m pretty sure Garren called Nerd on me for some of them–double drink. I also decided any time Kirk brought up the death of his beloved, known-for-about-a-day, illegitimate son we should drink. He stared longingly at a photo of David on his nightstand for many, many drinks.

It’s possible that Star Trek VI is actually my favorite movie of all the originals. I mean, the fourth whale one is excellent, but this one had a lot better cinematography and effects. Also plot. It did not have a cast member from 7th Heaven though so that was a definite drawback; on the other hand it had Kim Cattral and Captain Von Trapp.

I’m still sad that Nuala and Garren have left but I am delighted by how fabulous their last night in town was with the drinking, nerdery, and Star Trek.

the last 5 minutes = so awesome i need to share.

i saw that the mail had come so i went out to get it. imagine my surprise to receive multiple letters:

so much mail! i love mail!

plus the random miramonte mail was a check for $130 for vacation days being paid out or something. i’m not questioning it even though i haven’t worked there since december. $130, all mine.

I found the handwritten toast I made for Marina’s wedding when I served as Maid of Honor and felt the need to type it up and share due to recent events (Nuala and Garren getting engaged).

I’ve known Marina for 10 years since we went to college together at the University of Puget Sound. Back then we were too young to know what the future might hold, but I always suspected Marina would get married first.

On Marina’s bachelorrette party our friend Kristen made up a rhyming toast which ended, “…and here’s to Marina, the first one to fall.”

We may have been a little bit mocking in our laughter of her pioneer descent into matrimony; but it really all just stems from jealousy. You’re not falling into a trap, you’ve fallen into love.

Back when Mark and Marina first started dating–in November of 2002–Marina sent me an email, which I’m quoting here: “Michele, I am just so happy I really don’t know what to do with myself.”

Please join me in a toast to Marina and Mark. Cheers!

When you get married, Nuala, I’ll say to you, “Second to fall!” but I’ll say it with a smile, love and joy. I’m so happy for both of you finding the best of men to fall in love with and marry. Congratulations again!

the best thing about finer things club, is how supportive we can be of one another. i only read 8 pages of our chosen book this month.

nuala read the spark notes and christine and kristen read 100 pages (a third of the book). but we still managed to have a lively discussion about goat killings all the same. full disclosure: we’re unanimously against random violence against baby goats. maybe if you eat the kid we’ll forgive, but if you’re just killing it? NO FORGIVENESS, CRUSOE.

kristen’s pictures of the event are awesome and located here. i put up some on Flickr too.

after tea we watched pirates of the caribbean to continue our island adventure theme. we were supposed to watch swiss family robinson (who can not love ostrich racing? are you with me?) but i fell down on the job and didn’t manage to get it in time.

next month will be crazy lady month. we’ll be reading jane eyre or wuthering heights or the yellow wallpaper. i have no idea yet what costume this reading endeavor will spark, but man i am excited. also what foods do crazy ladies eat? i’m not eating rats or anything. what do you think insane people on the moors (scottish thistles?) or locked in turrets (moths?) eat? 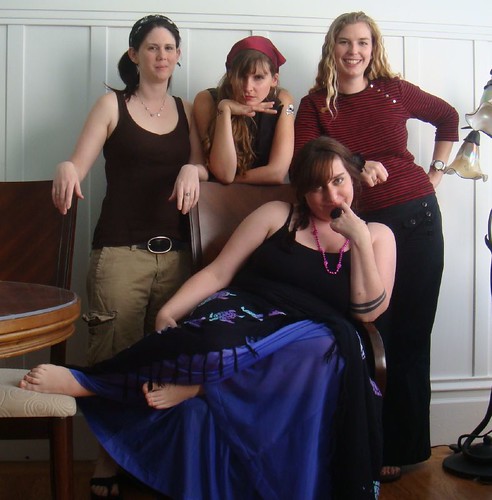